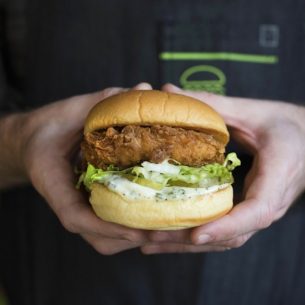 Shake Shack is no longer just a burger joint: after playing coy back in May when when it filed a trademark for “Chicken Shack,” and slowly dippings its toes in other sandwich waters with a limited test of chicken sandwiches in New York, the chain is now taking its fried chicken sandwich ambitions nationwide.

Starting today, most Shake Shack locations in the U.S. will serve the Chick’n Shack sandwiches for $6.29 each, the company said in a press release.

“The introduction of chicken marks a new era for Shake Shack, staying true to our core menu while continuing to innovate new items our guests have asked for,” Shake Shack CEO Randy Garutti said.

The company learned a few things from its tests in Brooklyn, when the sandwich was still called “ChickenShack.” It was a hit, Shake Shack says, but in order to peddle poultry nationwide, the team had to hammer out issues of sourcing, logistics, and training first.

“It wasn’t until we found the chicken sandwich to be as flavorful as our ShackBurger that we knew we’d crafted something special that had earned its place on the menu,” noted Shake Shack Culinary Director Mark Rosati.

Shake Shack has about 63 locations worldwide, including 10 in its hometown New York City and elsewhere in the U.S. in Washington, D.C., Philadelphia, Las Vegas, Chicago, Boston, Connecticut and New Jersey. The only locations left out of the henhouse at this point are located at John F. Kennedy International Airport in New York and any stadium Shacks.